This is the story of a very lucky MK1 1275cc Cooper ‘S’.  It tells the story of how a dilapidated wreck was eventually transformed into a glorious FIA Historic race car!  {sidebar id=12}In around 2001 a Swiss client asked us to restore a MK1 Cooper ‘S’ to its original factory spec.  We did this and the car was delivered to its new home near Geneva, where it happily resided for a few years before meeting with a very nasty end.

It was involved in an accident in the Alps when it skidded off the road, down an embankment and ending up embedded in a tree.

Thankfully its owner survived to tell the tale, but the car was a total write-off.  The body shell was bent through every axis and many mechanical parts were wrecked.  It was delivered back to our workshops where it was decided to use what was salvageable to build into a FIA Historic race car.

The car after the accident in the French Alps

We used a standard spec. MK1 Mini as the donor car and as we usually do, set about restoring the body shell.  It was very typically rotten and we ended up replacing around 70% of the body panels. 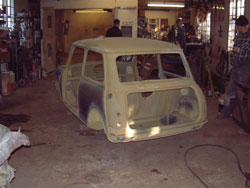 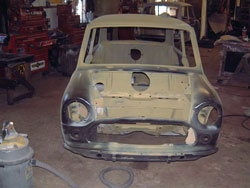 After the body shell was painted, we could then begin constructing the race car.  This was a pain-staking job because the FIA’s regulations are very strict, which means you have to follow the rules to the letter.


Although we were able to retrieve some components from the damaged car, many new parts were fitted.  These included specialist motor sport parts such as a fire-eater extinguisher system; baffled fuel cell; race seat; harnesses; roll cage etc. etc.

The engine, although having to be built to pretty much standard spec, has many bullet-proof parts fitted such as steel crankshaft and con rods.  The gearbox has been re-built using straight cut gears for strength.

Period twin H4 carburettors are permitted together with a re-worked cylinder head.  Numerous other ‘tweaks’ have been carried out such as lowering the suspension and optimising the suspension geometry.  All of these combined makes for a truly competitive, desirable period racer.